The next League Lunch & Learn is Thursday, February 3rd

The Zoom event is free, but people must be registered to receive the Zoom link.

REGISTER NOW : email lwvlunchandlearn@gmail.com . Include L&L Registration in the subject line of your email.

Each year the Lincoln – Lancaster League presents a series of programs featuring local, state and national speakers who address timely issues important to informed citizens. These FREE presentations take place on the First Thursday of each month from 12:00-1:00 p.m., September – May. Presentations will be streamed via Zoom. All you need to do is register to receive the link. You do not need to be a League member to participate, but we bet you might want to join soon!

The League of Women Voters of Nebraska encourages its members to DECLINE TO SIGN the voter restriction (voter ID) petition now circulating in the state and to SPREAD THE WORD on the real-world costs, complications and consequences of the proposed amendment on our right to vote.

The LWVNE is part of a coalition opposing restrictions on Nebraska voters.

The 2020 election saw the greatest participation in our nation’s history. Throughout election season, the League worked tirelessly to ensure voters had the information and the access to make their voices heard.

In the middle of a global pandemic, with rampant mis- and disinformation about our elections and unprecedented attempts to disenfranchise voters or push anti-voter reforms, the League found new and innovative ways to impact voters.

Your local League completed voter education sessions with several groups and delivered registration and education materials to all groups requesting them. We worked with local organizations and individuals to implement a social media Get Out the Vote program. The Directory of Elected Officials was updated in 2019 by Paula Eurek. lt is available in printed version and on our website. Most notably we did organize volunteers to serve as couriers for the 10 new ballot drop boxes approved by the Election Commissioner. We helped to develop and review a brochure called “Know your Voting Rights” led by the State League Voter Services Committee. 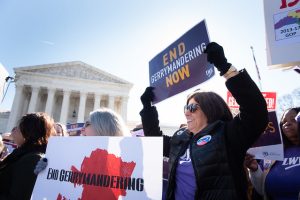 Redistricting is coming. Be informed now.

View a video produced by the Greater Omaha League of Women Voters explaining the redistricting process.

Contact your legislators, the Governor and Secretary of State

Directory of Elected Officials of Lincoln and Lancaster County